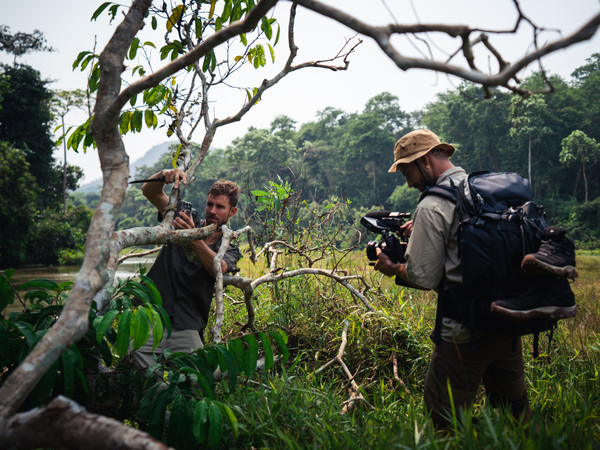 Arthur Sniegon is an inconspicuous fellow from Třinec, yet with his story he changes the fate of elephants and other endangered animals. The new film The Elephangelist shows his work in Central Africa, where he maps wildlife and exposes networks of ivory poachers. Lukáš Hodis, Jakub Chlouba, Radek Karko and David Alexa are behind the documentary. The film is available online, and a public premiere with the filmmakers took place on October 20 in Prague’s Dlabačov cinema, and repeated a day later at Fort Science, Palacký University Olomouc.

The protection of endangered animals became a personal issue for the scientist Sniegon, and he decided to dedicate his life to it. A zoologist cannot accept the fact that every fifteen minutes an elephant dies at the hands of man in the African wilderness. The rate of their extinction is so fast that soon there will be none left in the wild, mainly because of poachers.

“The driver of the brutal slaughter of elephants and other animals is, on one hand, the great poverty of the people of the African continent and, on the other hand, the huge demand in the markets, especially in East Asia. I have a hard time coming to terms with the idea that an elephant’s life is being sacrificed to make some silly statue, which is all the more absurd when we consider how important these animals are in the entire ecosystem,” says Arthur, who founded the Save-Elephants organization in 2013. With the organization, he participates in African wildlife monitoring and education, while also working with the locals to teach them to share space with the large animals.

The unique film The Elephangelist draws attention to the issue

Viewers of the film will witness the mapping of the Tsoulou region in western Congo, as well as the daring uncovering of poaching networks and the exposure of ivory and other wildlife products traffickers. “Thanks to the activities of the Save-Elephants organization, Arthur has already managed to intercept thousands of contraband shipments, arrest dozens of traffickers of ivory and other products, and thus locally reduce poaching pressure and the environment of impunity,” says the film’s producer Lukáš Hodis, who is also an employee of the Sts Cyril and Methodius Faculty of Theology UP. The documentary filmmakers want to use this particular story to show how each individual can contribute to solving a global problem.

Destruction of ecosystems anywhere in the world affects everyone

The importance of spreading awareness and education in the field of nature conservation is explained by Pavel Nováček from the Department of Development & Environmental Studies of the Faculty of Science UP. “Approximately 80% of the world’s population lives in developing countries, and with their material and energy demands, these people are creating ever-increasing pressure on the environment and on the increasingly intensive exploitation of animal and plant species on the planet. In Africa, for example, current demographic projections suggest that its population will rise from 1.4 billion today to more than four billion by the end of the 21st century. This is certainly not sustainable in the long term. If we are destroying ecosystems of global importance anywhere in the world (e.g. tropical rainforests), it will also affect us in Europe and the Czech Republic through climate change, drastic increase in environmental migrants and the like,” emphasized Nováček, who knows Arthur from the Czech Coalition for Biodiversity Conservation (CCBC). This organisation represents the activities of non-governmental organizations dealing with biodiversity and more generally environmental protection in a number of developing countries, particularly in Indonesia.

Fort Science, the scence popularization centre of FS UP, is preparing a joint educational event with Sniegon. “Professional scientific work leading to the rescue of elephants needs to be supported as much as possible, which is why we decided to organize a larger popularization event next year. Its aim will be to educate the general public and school groups about the issue of poaching and the destruction of agricultural crops. We want to motivate visitors to get involved,” plans Roman Chvátal, Fort Science programme director.

The documentary The Elephangelist will be followed up by a fundraiser at donio.cz/elephangelist, where people can support Sniegon in his further activities.

The creators of the film are Jakub Chlouba (director), Radek Karko (wildlife photographer), Lukáš Hodis (producer), and David Alexa (production and technical consultant). Together they have more than 10 years of experience in film production and photography. Their work is primarily focused on documentary production. Their most common subjects are inspirational stories of people or themes related to wildlife. The individual members have been behind such films as The Forgotten Art of Photography, “Nitěnky” – A Story Without Prejudice (original article here), and Future for the Maasais (coming in late 2022). Partners of the project are the Olomouc City Council, Huawei, the Zeměkvět Foundation, Šantovka Olomouc, ViaGood, DAV a.s., the Ivan Dejmal Foundation for Nature Conservation, FilmCrew, Gumotex, and UP Audio-visual Production.